‘Tis the season! For breaking records that is! Since our last post we have caught more Blackpoll Warblers, Trail’s Flycatchers, and Black-and-White Warblers than in previous years. Not only that, we actually broke the species record! Our 65th species was a lovely adult male Cape May Warbler. 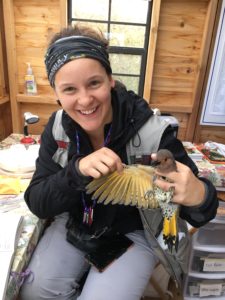 What a treat! One of our more recent moments of excitement came from a Northern Flicker. It’s always so much fun when a heavy weight hits the net! This Flicker in particular was a female and she had plenty to say. We could barely hear each other over her chatter!

One bird that was very interesting to catch was an adult female American Robin. She was originally 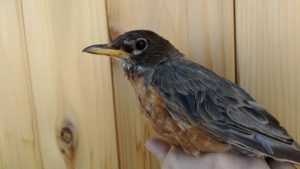 banded in 2016 and she was aged as an ‘after second year’ which means she’s at least 4 years old. Pretty impressive especially with the amount of Merlins and hawks around the marsh lately. It’s also so great to have her return here! Just imagine, she’s probably been back every year since, or we hope so. That just goes to show the quality of habitat we have here at Oak Hammock Marsh. We are all pretty lucky!

Only two more weeks to go and I think we can hit 70 species.